Richard Burn. A New Law Dictionary, Intended for General Use as Well as for Gentlemen of the Profession. 2 vols. London: Printed by A. Strahan and W. Woodfall for T. Cadell, 1792. 22 cm.

Richard Burn was born in Westmoreland, where he spent the greater part of his life. Educated at Oxford, Burn went on to serve in a vicarage in Orton. He also served as justice of the peace, and in 1765 was appointed chancellor of the diocese of Carlisle. 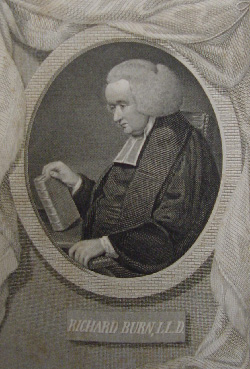 A New Law Dictionary is of significance not in itself, but as the product of a distinguished legal scholar. Burn is best known for his work Ecclesiastical Law (London, 1760), which was published in at least nine subsequent editions and became the standard text for this subject. His Justice of the Peace and Parish Officer went through twenty editions. He also edited the ninth, tenth, and eleventh editions of Blackstone's Commentaries.

The Tarlton copy of the two-volume London edition of the dictionary contains extensive handwritten marginal notes.

Tarlton Law Library holds both the London and the Dublin editions of this work.