The Modus legendi abbreviaturas is not, strictly speaking, a dictionary, but rather a verse glossary of abbreviations commonly found in Roman and canon law texts. 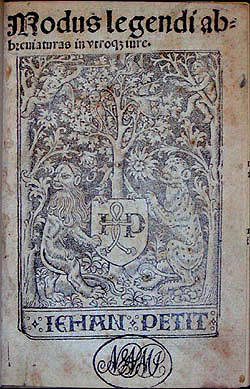 No author was credited in the publication, but Victor Scholderer (1880–1971), distinguished bibliographer and Fellow of the British Academy, discovered that the author, Wernherus of Schussenried (Werner von Schussenried), had embedded his name in an acrostic in the section titled “De decreto versificato.” The first letters of each line over several pages reveal:

The text probably continued, but as Dr. Scholderer noted, the minor emendations needed to read the first few words rapidly devolve to incoherence. The assumption is that a later editor, unaware of the acrostic, altered the text in the process of preparing the work for printing.

From this information, it is possible to deduce that Werner von Schussenried was a canon of Saint Germain in Speyer. He is otherwise unknown. The college of Saint Germain was sacked and burned by the troops of Frederick I, Elector Palatine of the Rhine, in 1462. Since the college was not rebuilt, the composition of this piece presumably took place before that date. Modus legendi abbreviaturas was first published in Strasbourg by the “R-Printer” (Adolf Rusch) around 1475. The brief text was often included in larger works, and two of the library’s three editions were issued with other concise reference works.

Jean Petit (d. 1530) was an extraordinarily successful printer and entrepreneur. The son of a wealthy butcher, he rapidly came to dominate the Paris book trade in the late fifteenth and early sixteenth centuries. Between 1493 and 1530 he published more than a thousand titles, and became one of the great official printers for the University of Paris. He achieved this impressive output by subcontracting work to other printers – sometimes as far away as Lyon.

Peter G. Bietenholz and Thomas B. Deutscher. Contemporaries of Erasmus: a Biographical Register of the Renaissance and Reformation. 3 vols. Toronto: University of Toronto Press, 2003, vol. 3, pp. 72-73.