Giles Jacob was heavily influenced by the philosophers Locke and Hobbes, both of whom 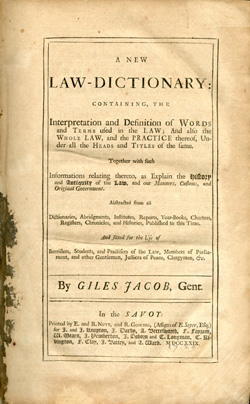 believed that a general agreement on the definitions of words was necessary, especially in the case of complex or moral concepts. Sensing that confusion about the law's meaning would endanger the rights of the people, Jacob attempted to reduce the rarified language of the law to something simple and clear.

Jacob began his dictionary in 1720 and published it in 1729.  The work was an ambitious attempt to combine a dictionary, an abridgment of the law, and a vocabulary of Anglo-Saxon and Law-French words. In his attempt to represent the whole law, he claimed that two-thirds of his work was new material. His abridgment included writs, judicial proceedings, forms of deeds and conveyances, as he felt these "contribute to the right understanding of our law." Although much of the material was not really new, the work was an improvement over its predecessors and provided a model for later dictionaries. It went through five editions before the author's death in 1744, and six more editions were published before 1800.

John D. Cowley. A Bibliography of Abridgments, Digests, Dictionaries and Indexes of English Law, to the Year 1800. London: Quaritch, 1932.