Pardoux Duprat was a celebrated humanist in his own time, but has now fallen into relative obscurity. 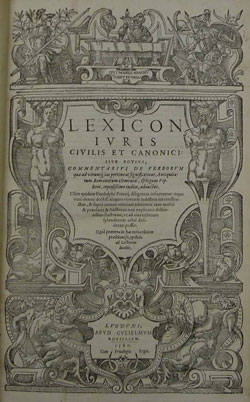 Born in 1520 in Aubusson into family of merchants, he also reputedly brought Calvinism to the town. Duprat appears to have been the student of Jean Coras, counselor to the Parlement de Toulouse. He became a Doctor of Laws in 1567 and became the official annotator of the laws of Charles IX of France the same year. Although the details of his life are sparse, he is better known for his scholarship. He edited works by Andrea Alciati (1492-1550), Azo of Bologna (fl. c. 1150-c. 1230), Everardi Hadrianus Marius (1509-1568), and Jean Faber (d. 1340). Duprat also wrote books on ancient Greek law and French notarial practice, and made the first translation of the Meditations of Marcus Aurelius into French.

The Lexicon juris civilis was Duprat's most successful work, and was published six times during a 15-year period. The terms cover civil and canon law, with brief attention to Greek law. The work draws heavily on the earlier works of Ulrich Zasius (1461-1536), as preserved by his student Jacob Spiegel, and Francois Hotman (1524-1590). The list of authorities Duprat cites includes the legal lexicographers Albericus de Rosate, Barnabé Brisson, Jacob Spiegel, and Johann Oldendorp (c. 1487-1567). He also drew on the work of a wide range of legal commentators, scholars of medicine, and literati, both ancient and contemporary. The definitions give considerable attention to lexicographical and philological issues.

The Library holds copies of the first and fifith editions. The 1580 edition bears the bookplate of John Cartaret, 1st Earl Granville (1690-1763), who was secretary of state to George II.