John Skene. De verborum significatione: the exposition of the termes and difficill wordes, conteined in the foure buikes of Regiam Majestatem, and others, in the actes of Parliament, infeftments, and used in practicque of this realme, with diverse rules, and commoun places, or principalles of the lawes. Edinburgh: Printed by Robert Waldegrave, 1597. 27 cm.

John Skene was born into a noble Scottish family. 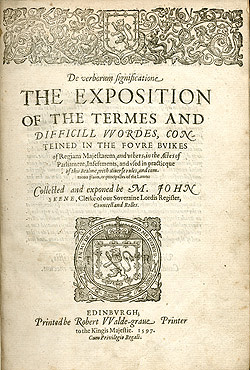 After possibly attending school in Aberdeen, and later King's College, Aberdeen, he joined St. Mary's College, St. Andrews, becoming regent in 1565. After seven years in Europe studying law, Skene returned to Scotland and was admitted as an advocate in 1575. In 1594 he was appointed clerk register and began reviewing exchequer records. From 1592, Skene served on a commission to review and print acts of parliament and other laws resulting in the publication of The Lawes and actes of Parliament, maid be King Iames the First, and his successours kinges of Scotland (1597).

The dictionary represents the fifth and final part of The Lawes and actes of Parliament. Skene's dictionary was the first Scottish attempt to define the language of the law. Perhaps best described as "idiosyncratic," the work drew extensively on earlier sources. A second edition of the compilation appeared in 1599, and it was rumored that Skene also prepared a third, unpublished, edition. The dictionary is littered with arcane spellings, peculiar grammar, and odd topics. Despite these limitations, the dictionary did fill a genuine lacuna and prompted other Scottish writers to improve upon the original.

In spite of shared borders with England and a common language, in Scotland, legal principles and nomenclature were drawn largely from Roman law rather than Common Law, creating parallel systems with similar ideals, but with substantial jurisprudential differences.

Tarlton Law Library holds four editions of this dictionary from the first edition in 1597 to 1681.