William Sheppard. An Epitome of All the Common & Statute Laws of This Nation Now in Force: Wherein More Than Fifteen Hundred of the Hardest Words or Terms of the Law are Explained. [London?]: Printed by W. Lee, D. Pakeman [and others], 1656. 29 cm.

William Sheppard was born in Gloucestershire and enjoyed a large law practice in the country before he was invited by Oliver Cromwell (1599-1658) to come to London. 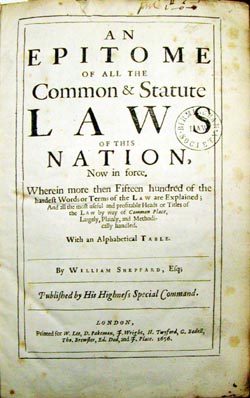 He was made one of the clerks of the upper bench, soon advancing to serjeant-at-law, and later preparing the charters granted to town corporations. While in office, he wrote several published works, including the much-reprinted Precedent of Precedents, as well as legal guides for constables, justices of the peace, parsons, and court keepers. During the Protectorate, he wrote a number of political pieces, all strongly Parliamentarian in tone. Unsurprisingly, Sheppard was removed from office during the Restoration and fell into obscurity.

Sheppard's work was said to be the earliest of the "encyclopedic" abridgments, containing the whole law, reduced to scientific treatises in alphabetical order by subject. As Sheppard claimed in his preface to have worked on this volume for more than 36 years, he must have been disappointed with the tepid response the work received; and while he produced a revised, enlarged edition in 1675, both volumes were soon forgotten.

On the verso of the title page, the Tarlton copy bears the bookplate of the Honorable Robert Price, dated 1703. Price (1655-1733) was a member of Lincoln's Inn who enjoyed a successful legal career spanning more than thirty years. Among other posts, Price was a member of the House of Commons for the borough of Weobley, a baron of the exchequer, and finally served as a justice of the common pleas.