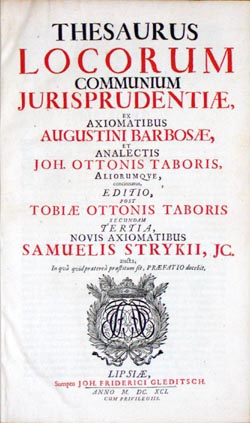 Agostinho Barbosa enrolled at the University of Coimbra, and after taking orders received a bachelor's degree in both Civil and Canon Law. He spent the next years expanding his education in France, Germany and Italy, finally ending up in Rome. His erudition attracted the attention of the ecclesiastical hierarchy, and Urban VIII appointed him treasury officer of the College in Guimarães. In February 1648, King Philip IV of Naples awarded him the bishopric of  Ugento (Naples), Barbosa was consecrated in Rome, and took possession of the see in May 1649, dying a few months later.

Often hailed as the most eminent of Portuguese canonists, Barbosa’s writings were both extensive and influential. Early in his career he published Dictionarium Lusitanico Latinum (1611) the most complete Latin-Portuguese dictionary at the time. In the field of canon law, he wrote over 150 works in Latin alone, and his collected works were published in 19 volumes at Lyons (1657-75).

Barbosa's law dictionary, the Thesaurus Locorum Communium Jurisprudentiae was first published in Strassburg in 1652, appearing in an additional seven editions, the last appearing in 1737.