Johann Kahl (also Calvinus, Calvus) was born in Wetter, near Marburg. He began his education at the university of Marburg in 1571, 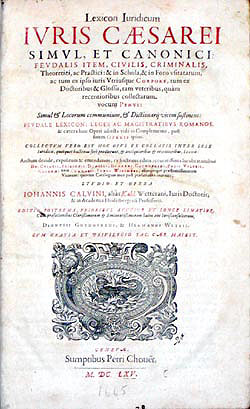 continuing at the University of Heidelberg beginning in 1576 under the guidance of French legal humanist Hugues Doneau, more commonly, Hugo Donellus, (1527-1591). He accepted a position on the Faculty of Law at Heidelberg in 1595, and taught there until his death in 1614. He wrote several books on politics, Roman Law, Jewish Law, judicial process, and produced two lexicons.

His best known work is Lexicon iuridicum, appearing for the first time in 1600 (Frankfurt). The text combines original work with compilations drawn from the writings of earlier lexicographers and scholars and substantial annotations. The Lexicon proved to be both serviceable and influential – John Cowell credited Kahl’s text with his inspiration to undertake his own law dictionary (Interpreter, 1607).

Because Kahl was a Protestant, this text ended up on the famous Index prohibitorum in 1659. In spite of this prohibition, at least 14 editions were printed between 1600 and 1673, six of them after the initial decree.

This Johannes Calvinus should not be confused with his near contemporary, the much better known French theologian, Jean Calvin (1509–1564).