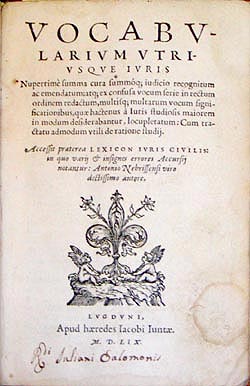 He was born in Lebrija (the Latin name is Nebrissa), Seville, and lived and studied in Salamanca and Bologna, concentrating on classical languages but reading widely in law, medicine, and theology. Between 1502 and 1517 he was briefly a member of the group of scholars gathered by Cardinal Ximénes de Cisneros at Alcalá to produce the Complutensian Polyglot Bible. During the same period his series of scriptural commentaries garnered the condemnation of the Inquisition, and Nebrija dedicated himself to lexicography.

Nebrija sought to standardize and regularize Spanish language and spelling, frequently under the patronage of Queen Isabella. He published the first reliable Latin grammar in Spain, Introductiones latine (1481), which he later translated into Spanish. Other works include Interpretatio dictionum ex sermone latino in hispaniensem (1492), and the first scientific grammar of any European vernacular language, Gramática sobre la lengua castellana (1492). Nebrija's law dictionary first appeared in 1506 as part of a collection of Nebrija's legal writings, entitled Aenigmata iuris civilis -- a humanist response to the errors of medieval legal commentators. In 1559 it was published for the first time in combination with the Vocabularius utriusque juris, and reappeared in this form for the rest of its publishing history, ultimately thirty editions.