Barnabé Brisson was born in Poitou into a family of jurisconsults. After studying law in Orléans, Bourges and finally Poitiers, he rapidly distinguished himself as a jurist and philologist. 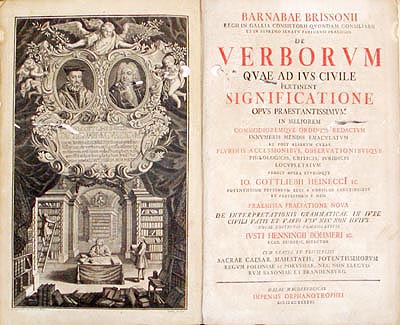 Brisson joined the royal court in 1575 and in 1588 Henry III appointed him sixth president of the Parliament of Paris. Although he was a moderate, his career was cut short in 1591 when he was hanged by the Seize (the Sixteen), on suspicion of royalist sympathies.

First issued in 1559, Brisson's dictionary derived from similar works that preceded it. De Verborum became the standard legal dictionary of the time, and lexicographers continued to refer to his work as an authoritative source for hundreds of years. In addition to definitions, the work listed the laws of the kingdom and collected Roman law.

The 1743 edition is a great deal larger than its predecessors. Edited and corrected by Johann Gottlieb Heineccius, a German jurist and scholar at Halle, the revised edition includes new notes and entries, and a section on interpreting Latin grammar. De Verborum appeared in seventeen editions before its final appearance in 1805.