Thomas Blount. Nomo-Lexicon: a Law Dictionary. [London] In the Savoy: Printed by Tho. Newcomb, for John Martin and Henry Herringman, 1670. 34 cm.

Thomas Blount was born at Bordesley Park, Worcestershire, the child of English Catholics, Miles Blount and his wife, Anne Bustard. 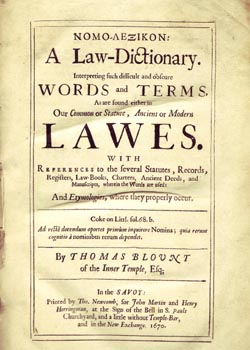 Although the source of Thomas Blount's training is obscure, he became a member of the Inner Temple in 1639 and was called to the bar in 1648. However, as a practicing Catholic he was excluded from the practice of law. It is likely he turned to writing as a means of supplementing his income.

His third book was his first dictionary -- Glossographia, or, A dictionary interpreting all such hard words, of whatsoever language, now used in our refined English tongue (1656). The fourth dictionary of the English language, Glossographia was the first English dictionary to include sources and etymologies. In 1667 Blount  published a revised edition of Les termes de la ley, and in 1670 published Nomolexikon: a Law-Dictionary, drawn heavily from The Interpreter by John Cowell. Blount was the first English legal lexicographer who cited references to authorities consulted, statutes, and treatises.

Although Blount is esteemed for his dictionaries in lexicographical circles, he is generally better known for his work as an antiquarian and local historian. Blount's last work, Fragmenta antiquitatis, Antient Tenures of Land, and Jocular Customs of some Manors, was published in 1679. Thomas Blount died at Orleton Manor, Herefordshire in December of the same year.

Nomolexikon is generally considered Blount’s most important work. Much plagiarized and quite popular, the dictionary was reissued in larger and revised editions throughout the eighteenth century. The work ultimately became an important source for the Oxford English Dictionary.

John D. Cowley. A Bibliography of Abridgments, Digests, Dictionaries and Indexes of English Law, to the year 1800. London: Quaritch, 1932.