Samuel Oberlander was born in Nuremberg to Catherine and Johann Oberlander – a button maker. 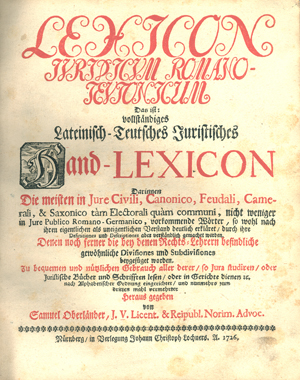 He enrolled at the University of Jena in May 1710 and began to study philosophy and law. He completed his dissertation in 1715, and continued in residence in Jena for another five years, possibly as a lecturer in law. Oberlander returned to Nuremberg around 1720 and went into government service. The council awarded him a license to practice law in 1722, and he began a short but distiguished career. He died only a year later in May 1723.

As short as his professional life was, Oberlander's lexicon was an important contribution to the study and practice of law. When he published the Lexicon in 1721, it was the first purely legal reference work in German to systematically provide definitions for Latin words and terms appearing in Roman, canon, and common law. The lengthy title lists the sources of terms as civil, canon and feudal law, Saxon law, cameral, electoral, and customary law, and Romano-Germanic law. The lexicon continues to contribute to the understanding of legal culture in Germany in the era of the Prussian Civil Code, a century before unification. The work was first published in Nuremberg in octavo. It was reissued five times between 1723 and the final fourth edition in 1753.

A testament to the enduring value of this reference book as a resource for historians and philologists, Böhlau reprinted the fourth and last edition of the lexicon in facsimile in 2000.