Robert Kelham was born in December 1717 at Billingborough, Lincolnshire, to the vicar of Billingborough, Threckingham, and Walcot. A member of Lincoln's Inn from 1734, he was 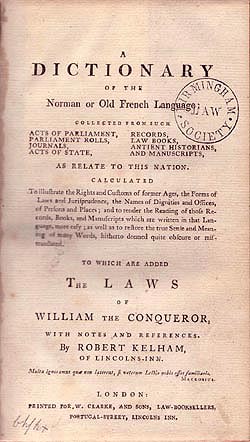 admitted as an attorney of the Court of King's Bench in 1739, where he practiced until 1792.

Kelham wrote chiefly on antiquarian subjects. He compiled A Dictionary of the Norman or Old French Language (1779), which was a significant improvement upon the anonymous Law-French dictionary of 1701. A number of his other publications no doubt contributed to his interest in early Law-French – chiefly Dissertatio ad Fletam—The Dissertation of John Selden, Annexed to Fleta, Translated, with Notes (1771), and Britton, containing the antient pleas of the crown: translated, and illustrated with references, notes, and antient records (1762). Kelham was more interested in literary works than strictly investigating the language of the law, which resulted in a dictionary that was incomplete and unscholarly.

Law-French was an Anglo-Norman dialect used in the English Courts beginning around 1066 and continuing in more or less increasingly degraded forms through 1500.  Although by the mid-fourteenth century Parliament was conducted in English, most English lawyers wrote all their reports and professional notes in Law-French until the reign of Charles II. Bowing to pressure to reform, in 1650 Parliament finally issued an order that only English was to be used in law books, but during the Restoration there was a widespread reversion to Law-French. The last publication in Law-French was roughly 1690. Most legal literature was written in Law-French or Latin until the seventeenth century. The main use of Law-French was in case reports, textbooks, and academic debates. Use “officially” ended in 1731.

Kelham's dictionary remained the most reliable Law-French dictionary through the end of the nineteenth century.