After graduating from Cambridge in 1582, Henry Spelman studied at Lincoln's Inn, but evinced no interest in the practice of law. He soon returned to 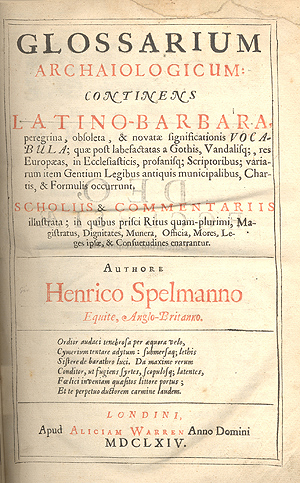 his family's considerable estate in Norfolk and began writing on antiquarian subjects, first transcribing Latin documents, but soon composing original treatises. Spelman rapidly became a well-respected and prolific writer, publishing more than a dozen major works and many other minor dialogues and essays. He also served as a Member of Parliament, high sheriff, and justice of the peace.

The Glossarium (first published in 1626, covering terms through the letter "L") superseded all previous law dictionaries. He composed the work for his own use -- while trying to write a study of the foundations of English law based on the original documents, he found it so difficult to assign proper meanings to Anglo-Saxon and Latin terms that he chose to postpone the study until he compiled a glossary of law terms. The Glossarium is remarkable for its scholarly thoroughness. Spelman relied on original documents whenever possible, and consulted with scholars throughout Europe to write his entries. The Glossarium was the first English dictionary of legal terms based on philological methods, and for his efforts Spelman earned "a title to the name of inaugurator of philological science in England."