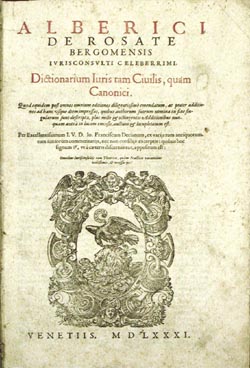 Educated in Padua, he acquired a doctorate but never taught, instead returning to Bergamo to practice law. He soon achieved both success and wealth, rapidly becoming intensely involved in local politics. In Bergamo he served as a judge and participated in the revision of the city's statutes in 1331 and 1333. While in the service of the Visconti of Milan, he travelled as ambassador to the papal court in Avignon three times -- 1335, 1337, and 1340. By the middle of the century Albericus was known across Europe for his commentaries on the Digest and Codex of Justinian and for his dictionary of civil and canon law.

Compiled after 1350 (see jubileus annus), Albericus' dictionary was considered essential for jurists and students for hundreds of years, and directly influenced all legal lexicography that followed. The Dictionarium combines three elements: an alphabetical Repertorium of Regulae juris, an explanatory dictionary, and an index of legal sources. Originally two works, one dedicated to civil and the other to canon law, a subsequent editor combined the two. The work is more practical than theoretical, reflecting the author's own experience. It was first printed in 1481 in Bologna, and seven more editions appeared over the next century. By the time of the last edition of 1581, it included hundreds of additions and emendations.