Timothy Cunningham. A New and Complete Law-Dictionary, or, General Abridgement of the Law. London: Printed by the law printers to the King's Most Excellent Majesty, for S. Crowder [etc.], 1764-1765. 37 cm.

According to his testament, Timothy Cunningham was the son of John Cunningham of Carickonshure (Carrick-on-Suir), Tipperary. Cunningham was a member of the Middle Temple, and lived in chambers at Gray's Inn for over thirty years. 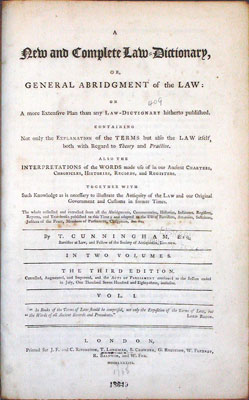 There is no record that he was called to the bar. Cunningham was the author or compiler of a large number of legal books including The Law of Bills of Exchange, Promissory Notes, Bank-Notes, and Insurances (1760), A New Treatise on the Laws Concerning Tithes (1765), and A New and Complete Law Dictionary (2 vols., 1764-5). He also wrote The History and Antiquities of the Inns of Court (1780). Cunningham was a fellow of the Society of Antiquaries after 1761, and left a bequest of £1000 to the Royal Irish Academy.

Cunningham attempted to give an alphabetically ordered account of the whole law in his two volume dictionary, hence the subtitle General Abridgment of the Law. More encyclopedia than dictionary, the lengthy compilation was specifically designed to compete with the still successful Jacob’s A New Law Dictionary, the only other contemporary work to attempt to restate the whole law and arrange the material alphabetically. The result was both verbose and cumbersome. Rather than achieving long popularity, Cunningham’s dictionary went through its third and final edition in 1783 – Jacob’s dictionary went through eleven editions and was still in print in one form or another well into the nineteenth century.

Tarlton Law Library holds the first and the third edition of this work.

Frederick Teague Cansick. A Collection of Curious and Interesting Epitaphs, Copied from the Monuments of Distinguished and Noted Characteres in the Ancient Church and Burial Grounds of Saint Pancras, Middlesex. London: John Russell Smith, 1869, p. 69 (provides approximate date of birth).