Edward Leigh. A Philologicall Commentary, or an Illustration of the Most Obvious and Useful Words in the Law. London: Printed by T. Mabb for Charles Adams, 1652. 15 cm.

Edward Leigh was born in Leicestershire. After receiving his M.A. from Oxford in 1623, 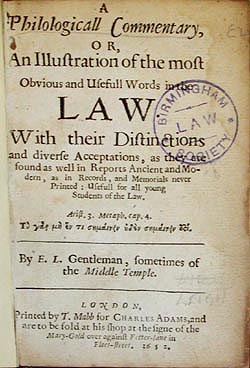 he entered the Middle Temple and devoted himself to law, divinity, and history. He served as a Member of Parliament at Stafford, and was appointed a seat in the assembly of divines. Leigh was a prolific but undistinguished writer, largely reworking existing texts without contributing anything new of substance.

His small octavo dictionary was no exception. First appearing in 1652, he intended it to be used by young students of the law and "country gentlemen." In spite of his protestations to the contrary, Leigh's definitions are quite similar to those found in Cowell and contemporary editions of Rastell, but simplified. A second edition of the dictionary, to which only a table was added, appeared in 1658.

John D. Cowley. A Bibliography of Abridgments, Digests, Dictionaries and Indexes of English Law, to the year 1800 (London: Quaritch, 1932)