John Cowell was born in Swimbridge, Devon. After attending Eaton College, he attended King’s College, Cambridge, receiving a BA in 1575, an MA in 1578 and an LLD in 1584. 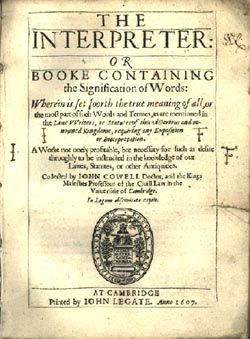 He was admitted as an advocate of arches in 1589, and shortly thereafter became a member of Doctors’ Commons, although his specialty remained civil law. From 1594, Cowell served as regius professor of civil law at Cambridge.

The Interpreter became a controversial imprint upon release in 1607.  John Cowell was unabashedly monarchist in an era when absolute sovereignty was becoming conceptually unpalatable in England. The definitions he provided for "King," "Parliament," "Prerogative," "Recoveries," and "Subsidies,” were interpreted by Parliament as dangerous.

King James I attempted to placate an already unfriendly Parliament by denouncing Cowell and his book, and issuing a suppression order in 1610. Chief Justice Sir Edward Coke was instrumental in having the book suppressed and publicly burned, and Cowell imprisoned, although the intervention of the king prevented Cowell's execution. Cowell resigned his professorship in May 1611 and died a few months later.

As is the case with most prohibited books, not all succumbed – thirty or so copies survive in libraries in the United States alone. Despite opposition, The Interpreter was considered scholarly, and remained the standard dictionary of English law for some time. The book was reissued in expurgated form in ten editions in the seventeenth and eighteenth centuries.

Tarlton Law Library holds eight editions of The Interpreter issued between 1607 and 1727.

Harold I. Boucher. "King James's Suppression of The Interpreter and Denouncement of Dr. Cowell." Manuscript, 1998.

John D. Cowley. A Bibliography of Abridgments, Digests, Dictionaries and indexes of English Law, to the Year 1800. London: Quaritch, 1932.