A Mid-19th Century Dictionary for US Jurisprudence 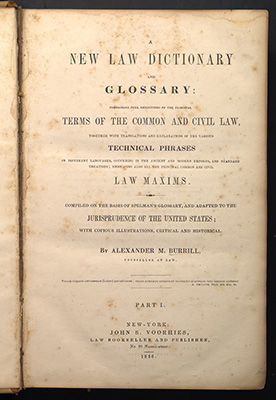 commentaries greatly influenced the development of common law in the United States. Burrill graduated from Columbia in 1824 and was admitted to the New York Bar in 1828, but did not achieve success with litigation, and soon withdrew from practice to concentrate on writing for publication. Like his mentor, Burrill became well known for his legal scholarship, and was the author of several important works including: Practice of the Supreme Court of the State of New York (1846), Law Dictionary and Glossary (1850), Law and Practice of Voluntary Assignments, (1853), and Circumstantial Evidence (1856).

Well into his career Burrill published this law dictionary, inspired by the methodology of English jurist Henry Spelman. Burrill limited his dictionary to the language of the law, defining and translating terms, and also distinguishing between words in current usage and those that were obsolete. His definitions referred to authoritative texts, cases, and statutes. In addition to English and American law, Burrill noted the contributions of Scottish and Civil law to the legal system in the United States.