The author, Frederic Jesup Stimson (1855—1943), was a Harvard Law graduate who later 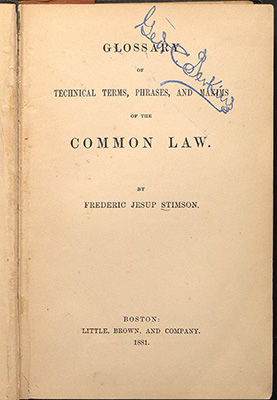 taught comparative legislation at Harvard, and served as U.S. Ambassador to Argentina during World War I. Stimson wrote several influential books on constitutional law, legislation, and labor law, including American Statute Law (1886) and Popular Law-Making (1910). He was also a novelist, initially publishing under the pen-name of J. S. Dale. Stimson's historical romances, especially King Noanett (1896) and My Story (1917), were quite popular in their own time.

According to the introduction, Stimson's Glossary "is not a compilation of law, like the larger dictionaries, but consists purely of definitions." Its vocabulary is taken from that of the common-law courts, giving "the popular and usual acceptation of each phrase, in much the same rough and general shape in which it would stand in the mind of the trained lawyer." A revised edition of Stimson's Glossary was published in 1911. .