A Long-Lived Pocket Dictionary for Students 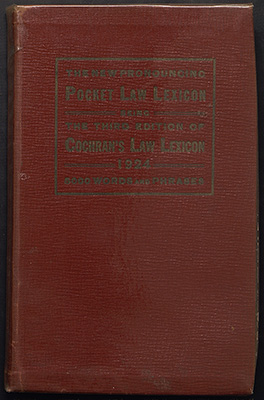 connection to Oberlin College. He was graduated from Oberlin College in 1869, and initially served in the Department of the Interior in Washington under his stepfather, Jacob D. Cox. After studying law, he was admitted to the Ohio Bar in 1872 and opened a practice in Cincinnati. For most of his professional career, he practiced corporate and patent law, serving as a bar examiner from 1901-1903. Cochran also served as clerk of the U.S. Circuit Court of Appeals in Cincinnati. He was the author of a number of historical works, in addition to this student dictionary. He was a trustee of Oberlin College from 1901—c.1906. In 1919, Cochran was awarded an Honorary Degree of Doctor of Laws from Oberlin College.

This small dictionary was dedicated to the author’s stepfather, statesman Jacob D. Cox. The stated goal was to provide a condensed dictionary of law terms not otherwise familiar. He omitted obsolete terms he deemed only of historical interest, and terms in general usage without any “special significance.” He hoped that if book was imperfect, it was at least useful. Since it went through at least six editions, the most recent in 1997, it may be assumed that his hope was realized.