J. Kendrick Kinney. A Law Dictionary and Glossary: Primarily for the Use of Students but Adapted Also to the Use of the Profession at Large. Chicago: Callaghan, 1893. 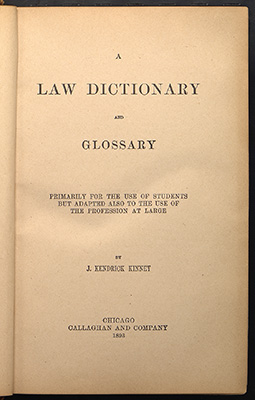 He was educated in a local school and later at the Royalton Academy. Kinney served in the volunteer army in the Civil War, and initially pursued a career in business in the West. He returned East to attend Harvard Law School, receiving his degree in 1875. He then practiced as a lawyer, served as a reporter, and contributed to legal periodicals. In addition to the Law Dictionary, he also wrote A Digest of the Decisions of the Supreme Court of the United States (1887), and edited the Law of Railways, by Isaac F. Redfield (1887).

According to the preface, Kinney’s intention was to provide as brief definitions of terms as possible, without losing meaning. In addition to contemporary terms of law, Kinney defined historic terms in a variety of languages, and words that, although not strictly limited to law, had meaning and function in the field.

Contemporary reviews were positive. The Green Bag reported it “as good as any we have seen.” Others praised the large number of terms defined. In spite of the warm critical reception, the dictionary could not compete with Black's Law Dictionary and was issued in this edition alone.