John Davison Lawson (1852—1921) was born in Hamilton, Ontario, received his degree from 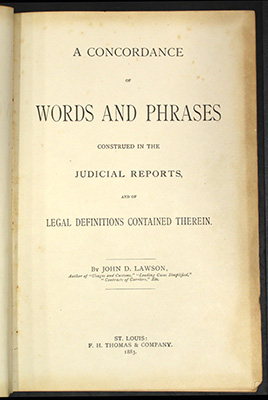 the Hamilton Collegiate Institute, and graduated with honors from the law school in 1875.  He continued his study of law under the direction of Kenneth Mackenzie in Toronto, and was called to the bar in 1875. He almost immediately moved to the United States and was called to the Illinois Bar in 1875 and the Missouri Bar in 1876. He soon became a frequent contributor to legal journals and law reviews, and was editor of the Central Law Journal, 1877—1882. Following a sojourn in New Jersey where he served as County Judge until 1890, he returned to Missouri, where he again served as a judge from 1890—1895.  After receiving an honorary LLD from the University of Missouri in 1891, he joined the law faculty at the University of Missouri. He served first as professor and later dean of the School of Law (1903—1916). A prolific author, he authored treatises on contracts, evidence, bailment, and a collection of state trials, but was best known for his work to reform criminal procedure.

Lawson's Concordance does not itself provide definitions, but instead directs the reader to judicial decisions that provide the definitions. He included references to of not only legal terms, but ordinary words defined by the courts. The work was sufficiently successful to warrant a second edition in 1903, which also added statutory terms.