The Immediate Precursor to Black’s

William Caldwell Anderson (1852—1910) was born in Pennsylvania, where he spent most of 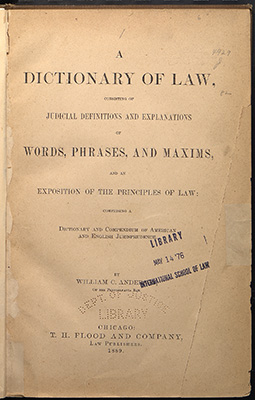 his life. He graduated from Lafayette College in Pennsylvania in 1873, and completed his education at Yale Law School as a member of the class of 1876. Anderson was also the author of Rules of the Courts of Pennsylvania (1879), The Law of Railway Liens (1889), and other legal works. He spent the last years of his life revising his dictionary, and the volume was nearly ready for publication when he suffered a nervous breakdown and died two months later.

Anderson sought to produce a dictionary that would not simply build on its predecessors, but be something genuinely new. He included pronunciations, variant and preferred spellings, and the etymologies of technical terms. He also preferred definitions that had been outlined by the highest courts of the United States. As a departure from many earlier dictionaries, Anderson eschewed obsolete words and phrases, and non-legal terms he deemed of no use to the student or practitioner. Anderson's dictionary is significant in part because it preceded Black's by two years. Black acknowledged a debt to Anderson in the preface to his first edition. The work remains an authoritative legal reference text.