The First Legal Dictionary for the United States

John Bouvier (1787—1851) was born in France, but immigrated to the United States 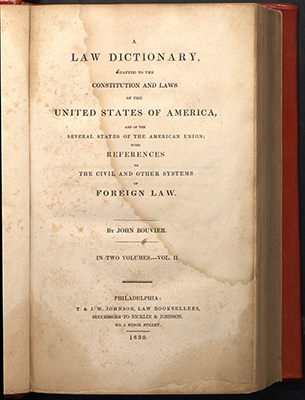 in 1802. He became a US citizen in 1812, was admitted to the bar in 1818, and began practicing law in Philadelphia. Both during his legal education and in practice, Bouvier became frustrated by the need to rely on English legal dictionaries that were irrelevant to the laws of the United States in many ways. His solution was to spend the next 10 years writing a dictionary tailored to the laws of his adopted country. The work was at last published in 1839. In order to break with English antecedents, Bouvier based his definitions on the Constitution, customs, court decisions, and statutes of the United States. He also included entries for all the states that had formed the union as of 1839. A large two-volume work, Bouvier's dictionary has been especially useful for understanding obsolete terms given in older authorities. The earlier editions included Robert Kelham's Dictionary of the Norman or Old French Language as an appendix.