A Light-Hearted Look at Legal Lexicography 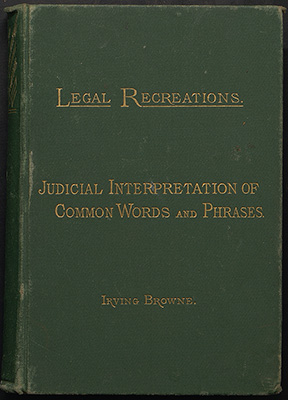 (Humorous Phases of the Law and Law and Lawyers in Literature) and of serious legal works including treatises on domestic relations, criminal law, and parole evidence. Judicial Interpretations of Common Words and Phrases was published as part of the "Legal Recreations" series. In his introduction, Browne notes that "The law has taken pains particularly to define some words and expressions the meaning of which would seem quite apparent." For example, in the entry for "Person," he reports that the courts have determined that a dog is not a person, but an Indian and the Queen of England are persons. “A wife is not an ‘other person’ from her husband, within the meaning of a statute forbidding malicious damage of the property of ‘any other person,’” he continues. “So a husband may smash his wife's sewing machine with impunity. So held in State v. Nugent, New Jersey. But we believe that it has never been held that if a husband murders his wife he simply commits suicide. At all events the courts generally hang him for such suicide.”