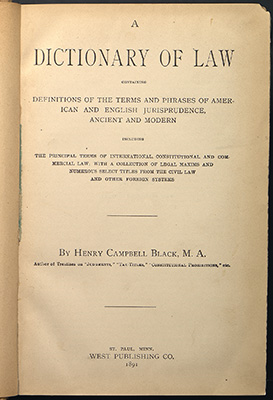 He was educated at Trinity College in Connecticut, from which he received a bachelor’s degree in 1880, a master’s degree in 1887, and an LLD in 1916. He studied law in Pennsylvania and was admitted to practice there in 1883, but soon abandoned the practice of law, and with his parents moved to Washington, D.C. In addition to authoring Black’s Law Dictionary, he also wrote Handbook of American Constitutional Law, and was the editor of The Constitutional Review from 1917 until his death in 1927.

The sixth and earlier editions of the book provided case citations for the term defined, a feature popular with practitioners since this provided a starting point for further legal research. The eighth edition introduced a unique system of perpetually updated case citations and cross-references to legal encyclopedias. The current, ninth edition was published in 2009 and edited by Bryan Garner.

To date this dictionary has been cited by the U.S. Supreme Court in roughly 250 cases, the first time in 1901 for Black’s definition of “common law.”