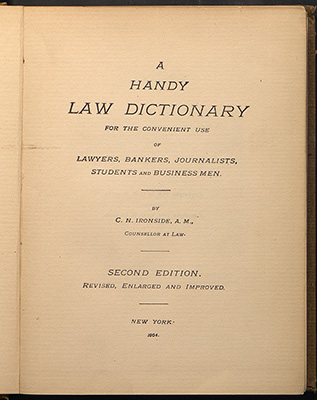 his degree in law from Georgetown in 1882, continuing his education at Rutgers (AM, 1884), and the Nashville College of Law (LLD, 1900). He was also a member of Chi Phi fraternity. Ironside was a member of the Ohio Bar, but by 1898 had left the mid-west for the New York City, to pursue a career as an author, journalist, and bookbinder. After a peripatetic career, he eventually returned to Ohio, where he died.

This small-format dictionary was written as much for non-practitioners as for lawyers, but Ironside did consult with members of the New York Bar and, for the second edition, a number of eminent jurists. The work was first issued in 1899 and was sufficiently popular to warrant a second edition in 1904. He is best known for his dictionary, but he also contributed to the volume Quickness of Perception (1891).