A Concise Dictionary to Accompany a Legal Encyclopedia

Charles Erehart Chadman. A Concise Legal Dictionary: Adapted for the Use of Law Students and All persons Studying the Fundamentals of English and American Law. Chicago: American Correspondence School of Law, 1909. 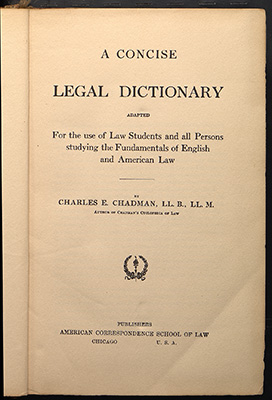 from the University of Michigan School of Law. In addition to his Dictionary and Cyclopedia, he authored a number of treatises on a variety of subjects, criminal and civil. He died in Cleveland, Ohio.

The Concise Legal Dictionary was designed to be a companion to Chadman's Cyclopedia of Law (1908). Chadman states that it is "aimed to present to the law student and the busy man, words, expressions and maxims of the law in as concise a form as possible, limiting them to such terms as have a special significance in legal science." The publisher, American Correspondence School of Law, also published an edition of Chadman's Cyclopedia, which suggests that the Cyclopedia and the Concise Legal Dictionary provided an all-in-one textbook for the correspondence school. 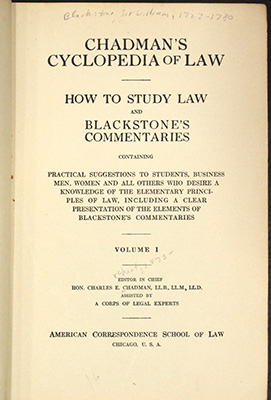 The Cyclopedia is a legal encyclopedia. Inspired by Blackstone’s Commentaries, the Cyclopedia cites cases and articles, reviewing influential cases in detail, and always referring to an authoritative text. The twelve volume set provides an impressive amount of information, but the volumes are not well indexed, and the subjects are assembled haphazardly.