In order to avoid registering deeds, which was costly and cumbersome, land sales were often drafted as a “lease and release” 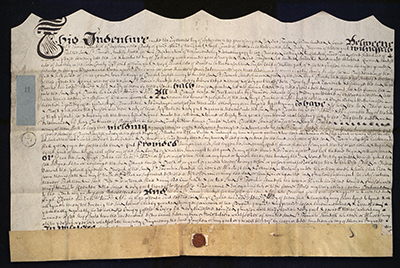 In this document, the Standish family is not fully relinquishing control of the land.  Instead, the land is leased for a 99-year term. The property in question is a cottage and croft (a small enclosed parcel of arable land, usually around a dwelling), purchased for three pounds sterling. The rent is four shillings and two hens at Christmas. A wheat kernel, barley corn, or peppercorn were also popular nominal rents for long-term leases.

Hugh Crooke used an H as his mark to execute the document.