Release of a Widow’s Annuity

Elizabeth Sands, a widow, and cousin and heir of the late Robert Wilcocks, releases her annuity (or rent) of £5 from her property at 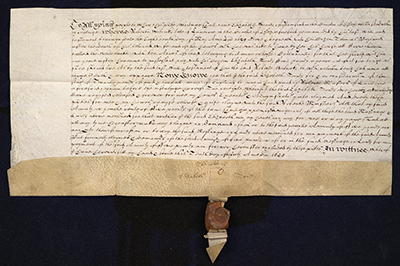 Hornchurch to Robert Masters. Annuities or annual rents like this one were frequently given to women for their maintenance and often were part of a marriage settlement. It appears that Elizabeth inherited this annuity.

Although quite a few female signatories were sufficiently literate to sign their own documents, Elizabeth has instead made her “mark” – in this case, a circle.  These marks were often in the form of crosses or exes, but all manner of other squiggles were also employed.

This is one of several related documents featuring Robert Masters.