In this document, Baron de Grey provides a tenancy to his two vassals, Thomas Twisden and Thomas Heneage. Although English became the preferred language for legal transactions by the seventeenth century, 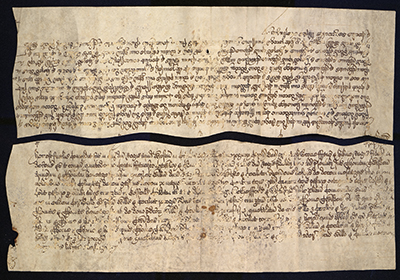 manorial documents continued to appear in Latin until 1733. This document is an example of a tripartite indenture.

Indentures were one of the two major forms of legal documents with the other being deed polls. Deed polls had regular edges, whereas indentures were cut apart in wavy lines or peaks (dents). The advantage to an indenture was that the two or more pieces of the document could be aligned to prove authenticity. This was further enhanced by the inclusion of words or symbols along the cut, which would also be matched. In this case, the two pieces shown are identical and would have gone to the two parties involved. The missing third section would have been filed with the court.