During the 1950s, the School of Law developed into the institution familiar today. With the post war boom in enrollment, an already crowded Law Building became simply inadequate. A plan to build a new building was approved in 1950 and in late 1953, Townes Hall opened. 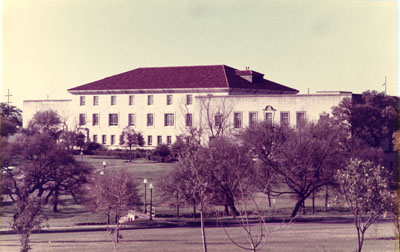 The building was named for Judge John C. Townes, at the time the longest serving dean of the law school. The new structure added almost 85,000 square feet of space. The new Law Library was named in honor of Judge Benjamin D. Tarlton, who had also served on the faculty prior to his untimely death in 1919. The library holdings exceeded 90,000 volumes in 1953.

Admissions criteria continued to become more rigorous.  In 1956 the LSAT was required of all applicants – aptitude tests had been considered as early as the mid-1940s. The curve was re-evaluated to reflect the high quality of the student body.

The 1950s marked other milestones for the School. By 1952, the School of Law had graduated over a hundred women, and the percentage of female students continued to rise. In 1953 the first African American received an L. L. B. from the University of Texas School of Law. Dean Keeton oversaw all of these changes and became the longest serving dean of the Law School, 1949-1974.