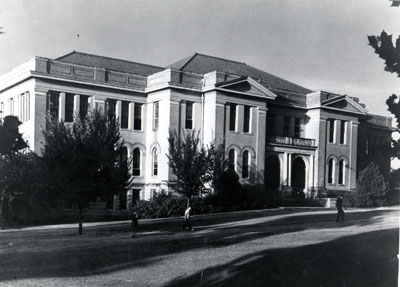 since law students were not exempt from the draft as were pre-med and engineering students.  The wartime admissions criteria dropped the number of college credits required from 93 to 60 – the degree program was also reduced from three to two years. This war-time standard ended in the spring of 1945. Post war, the school grew enormously, with over 1000 students attending in 1947.

In order to meet the needs of the larger student body, the faculty again expanded, this time to twenty-one full-time, and four part-time professors. A senior seminar and a legal writing course both became requirements for graduation. Another benefit to students was the new Law School Placement Service, which opened its doors in September of 1948.

Under the guidance of Charles T. McCormick (dean 1941-1949), the Law School continued to grow and adapt to meet changing needs and expectations. The first legal aid clinic appeared in 1941. The year 1949 saw the appearance of a law school yearbook – The Peregrinus.  The annual remained in production until 2004. By the end of the 1940s, the library had grown to 65,000 volumes, remaining at number two in the South.