Admission requirements increased again in 1910 to five courses in the arts and sciences, or one full year of college class work, before law school – three additional courses in the humanities were required to earn a law degree. 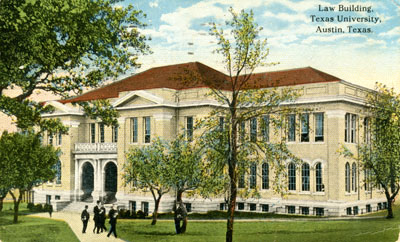 Once admitted, a law student could expect to spend twelve hours a week in class in 1910, and fifteen by 1914.

When the U.S. became involved in World War I, students who withdrew to enter military service in the spring of 1917 were given credit for their unfinished courses, providing that they had a passing grade. The American Law School Review reported a 60% reduction in attendance at UT. In spite of the large number of students and faculty that served, only twelve law school students lost their lives in the course of duty.

During this decade the Department of Law produced its first two female graduates, Irene Brown and Rose Zelosky, in 1914. The most prestigious honorary society at the Law School, the Chancellors, was founded in 1912.