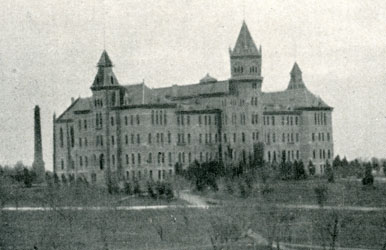 the Texas Legislature enacted the “diploma privilege,” which exempted University of Texas Department of Law graduates from the bar examination in the state. Although the department grew and flourished – graduating over 500 students by the turn of the century – classes continued to meet in the basement of Old Main, which also housed a growing law library (4000 volumes in 1899). After briefly residing under the auditorium, the Law Department moved to the basement of the east wing of the Main building. The Main building was finally completed in 1899.

In 1894, the law faculty expanded to six – two full professors, one adjunct professor, and three lecturers (all of whom were Texas Supreme Court Justices.) The increase in faculty made it possible for the University to add a graduate course in law, leading to a Master of Law, and a course of evening instruction. Enrollment continued to outstrip graduation – it was possible to present oneself for legal examination after completing the junior year of study and go directly into practice. The two original faculty members both faded from the scene during this period – Oran M. Roberts resigned in 1893 and Robert S. Gould stopped teaching undergraduate classes in 1899, going into full retirement in 1904.