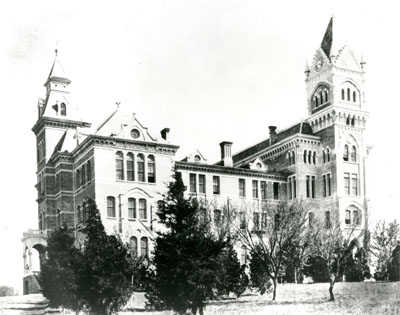 By 1889 the number of law students in attendance had reached 91. The west wing of the “University Building” was completed by January 1884 on the original forty acres, and students and faculty were able to move from their temporary quarters in the capital building into the new facility. Law classes met in the basement of what was to become known as Main, and later still “Old Main.”

The course of law in this period took two years, and although a “collegiate” education was not required, it was recommended. By the end of the decade if applicants were not graduates of an “approved” high school or “reputable” college they were required to pass examinations covering Composition, Mathematics or Latin, and English or U. S. History, or remedy the deficit by enrolling in appropriate course in the academic department. No tuition was required of residents of the State of Texas, although there was a matriculation fee of $20. In addition, out of state students were charged a tuition fee of $20.

Reports from the board of Regents to the Legislature provide detailed information on admissions and matriculation, courses of study, expenses, and university programming.