The most visible change during this period was the building of the (Old) Law Building between 1906 and 1908. The brick building was two stories, with a basement, a tile roof, and provided space for teaching, offices, and the law library. 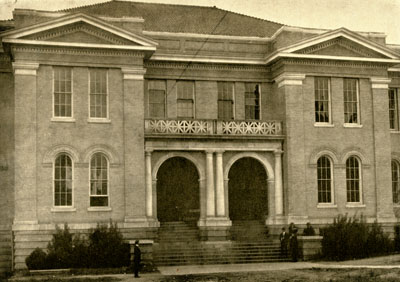 The length of a law degree increased from two years to three years in 1903, and admission requirements became once again more stringent, including a minimum age of 19 years. By 1900, there were four full professors, and between 1904 and 1909 the law faculty increased from five to nine full professors and a number of adjuncts. The Department of Law selected its first Dean in 1901 – John C. Townes, for whom Townes Hall is named. He served from 1901-1902, and from 1908–1923. By the end of the decade enrollment stabilized around 380 – a number that remained more or less unchanged until the 1930s. The first female law student enrolled in 1906, although she did not graduate. A.A.L.S. (Association of American Law Schools) included the University of Texas in its first list of approved schools in 1907.

Many of the traditions now associated with the School of Law, and some that have disappeared into history, emerged during the first ten years of the twentieth century: the selection of the school’s colors; the Sunflower Ceremony; the school mascot, the Peregrinus; referring to the freshmen laws as “J. A.’s;” class “rushes” or good natured skirmishes; and enduring rivalry between the School of Engineering and the School of Law.