By 1935 the School of Law had become one of the largest law schools in the United States, and the largest state school, with an enrollment of over 700 students. The law faculty had by this time grown to fifteen, including a stenographer.

Admission requirements were again adjusted in the 1930s, and a prospective student wasrequired to have completed 93 college credits before entering law school, which made the prerequisites unusually rigorous. During the same period, the ABA recommended that prospective law students have completed 60 credit hours before applying to law school. 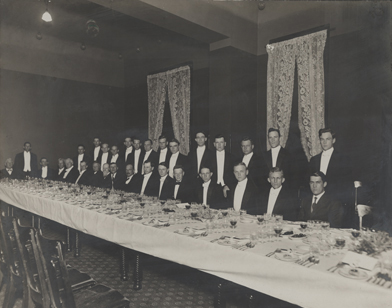 The statue of the Peregrinus was stolen by the Engineers twice from the annual law banquet in the 1930s – the banquet was suspended for a time as a result. It is likely that the current incarnation of the Law School mascot was executed by Austin artist Peter Mansbendel around 1935.

In 1939 the Judge John C. Townes Memorial Library held 43,000 volumes and was the largest law library in the Southwest (a distinction still held today) and second in the South only to Duke.