During the first half of the twentieth century, Tennessee (along with many other traditionally rural states) experienced growth in urban 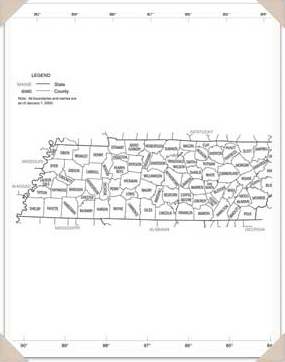 After serving in World War II, Charles Baker returned to his hometown of Millington, Tennessee, which was a suburb of Memphis. Baker entered politics and in 1954 was elected chairman of the Shelby County Quarterly Court, a fiscal and legislative body that ran the affairs of Shelby County, which included Memphis. Baker became frustrated with the lack of state revenues and attention paid to Memphis. Due to the use of outdated election district boundaries, Memphis was represented by half the number of state legislators it rightfully deserved based upon its population. Baker brought suit against Joe Carr, Tennessee's secretary of state, requesting the state legislature redraw the election district boundaries to reflect the actual demographics of the state.

Prior to Baker v. Carr, the Supreme Court had considered state apportionment a political question to be handled by the legislative branch. In the 1946 decision Colegrove v. Green, the Court declined to involve itself in the apportionment process, arguing that the political nature of apportionment precluded judicial intervention. Based upon this ruling, the district court dismissed the case. The dismissal of the case was appealed to the Supreme Court, which heard arguments in April 1961.

In a decision delivered by Justice Brennan, the Court focused on the issue of whether the Court could involve itself in an apportionment dispute. In addressing this issue, the Court held that apportionment was a federal claim arising under the Fourteenth Amendment, and therefore subject to judicial scrutiny by courts. Additionally, the voters initiating this case had claimed that their votes were being arbitrarily impaired or debased. The Court's decision sidestepped the prior decision in Colegrove by distinguishing claims brought under the Equal Protection Clause of the Fourteenth Amendment from those claims brought under the guarantee clause of Article IV of the Constitution. The Court returned the case to the district court for further action pursuant to their instructions.

Justice Clark filed a concurring opinion arguing that Tennessee's apportionment system was arbitrary and observing that, in the absence of initiative or referendum mechanisms, judicial intervention was the only effective remedy. Justice Frankfurter, who had delivered the Court's opinion in Colegrove sixteen years earlier, dissented from the opinion, objecting to the Court's departure from precedent, its intervention in a potential mathematical quagmire, and to the lack of standards by which to resolve apportionment issues under the Fourteenth Amendment.