In 1950, Pete Hernandez, a migrant cotton picker, was accused of murdering Joe Espinosa in Edna, Texas. At that time, no person 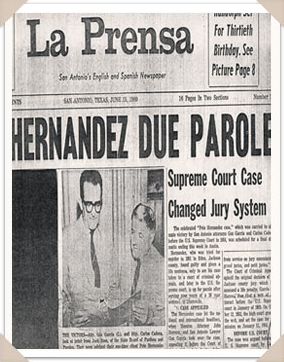 of Mexican origin or with a Hispanic surname had served on a jury in Jackson County, Texas (where Edna is located) for at least twenty-five years, despite the fact that fourteen percent of the population of Jackson County was Hispanic. Gustavo Garcia, a Mexican-American civil-rights lawyer and University of Texas graduate (B.A. in 1936 and LL.B. in 1937), agreed to represent Hernandez in order to challenge the systematic exclusion of persons of Mexican origin from all types of jury duty in at least seventy counties in Texas. At trial, Hernandez was found guilty by an all-white jury and sentenced to life in prison. The Texas Court of Criminal Appeals upheld the verdict. The case was then appealed to the United States Supreme Court.

Garcia argued that the Fourteenth Amendment guaranteed protection not only on the basis of race but also class. The process of jury selection in Jackson County, Texas introduced discrimination because of exclusion based on class, namely Hispanic origin. The state of Texas contended that the Fourteenth Amendment covered only race, rather than class and that since Mexican Americans are white and the jury was white, the Fourteenth Amendment should not apply. The state did admit that no person with a Spanish surname had served on any type of jury in Jackson County for twenty-five years, but insisted that this only indicated coincidence, rather than a pattern of attitude and behavior.

Chief Justice Earl Warren delivered the unanimous opinion of the court in favor of Hernandez and ordered a reversal of Hernandez' conviction. The Supreme Court accepted the concept of distinction by class, and found that in excluding Hispanics from jury duty, Texas had unreasonably singled out a class of people for different treatment. According to the Court, Hernandez had been deprived of the equal protection guaranteed by the Fourteenth Amendment, a guarantee "not directed solely against discrimination between whites and Negroes." The court held that Hernandez had "the right to be indicted and tried by juries from which all members of his class are not systematically excluded."