On March 13, 1963, police picked up Ernesto Miranda as a suspect in a case of kidnapping and rape. Miranda was placed in a 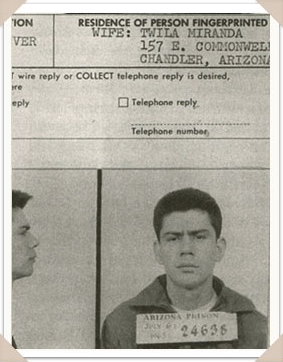 lineup and identified by the victim. Police took Miranda into an office to continue questioning him regarding the crime. After two hours of questioning, he wrote a confession. Miranda had not been told of his right to consult with an attorney during police questioning or warned that any statements he made could be used against him. At trial, the jury found Miranda guilty of kidnapping and rape and sentenced him to 20 to 30 years in prison.

The Court consolidated Miranda v. Arizona with Vignera v. New York, Westover v. United States, and California v. Stewart to review police practices. In Vignera v. New York, Michael Vignera was convicted of first-degree robbery and sentenced to 30 to 60 years in prison after his confession (made at a police station without legal counsel) was presented to the jury. Vignera had not been made aware of his right to an attorney.

In Westover v. United States, Carl Calvin Westover had been arrested by police as a suspect in two local bank robberies. After 14 hours of questioning, police transferred Westover to the Federal Bureau of Investigation for further questioning regarding two additional bank robberies in California. While the local police did not inform Westover of his rights, the FBI agents did. After two hours of questioning by the FBI, he confessed to the bank robberies in California. At trial, he was found guilty and sentenced to 30 years in prison.

In California v. Stewart, Roy Allen Stewart was arrested in connection with a string of robberies and a murder on January 31, 1963. Police questioned Stewart eight times over the next five days. During the ninth interrogation, Stewart confessed to the robbery during which the murder had occurred. Stewart was not informed of his right to legal counsel or his right to remain silent. At trial, he was found guilty and sentenced to death. The California Supreme Court reversed his conviction due to the fact that he had not been made aware of his right to legal counsel. The state of California appealed the case to the United States Supreme Court.

In these cases, the Supreme Court reviewed the police practice of interrogating individuals without notifying them of their right to counsel and their ability to protect themselves against self-incrimination according to the Fifth Amendment. In a decision delivered by Chief Justice Earl Warren, the Court overturned the convictions of Miranda, Vignera, and Westover and upheld the California Supreme Court's reversal of Stewart's conviction. The decision outlined specific rules governing questioning of suspects, namely that police must inform suspects of their right to remain silent, that any statements they make can be used against them, and that they have the right to have an attorney, which the state will provide if they cannot afford to pay. Suspects could waive their rights and talk to the police, but the waiver had to be made "voluntarily, knowingly, and intelligently."

Justice Clark wrote a separate dissent, agreeing with the Warren opinion only in the Stewart case.