Title II of the Civil Rights Act of 1964 forbade racial discrimination in hotels, motels, restaurants, theaters, and all other public 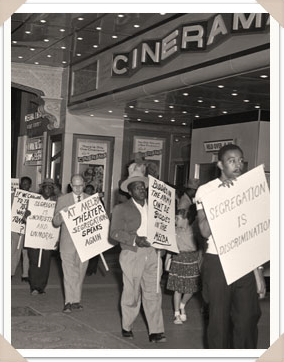 accommodation engaged in interstate commerce. Ollie McClung, the owner of Ollie's Barbecue in Birmingham, Alabama, continued to refuse service to blacks after the passage of the Act, and brought suit against Attorney General Nicholas Katzenbach contesting the Act's enforcement.

While serving a mainly local clientele, Ollie's Barbeque served approximately 500,000 meals annually, grossing $350,000. The restaurant could serve a maximum of 220 diners at any given time and had 36 employees, 26 of whom were black. Between July 1, 1963 and July 1, 1964, Ollie's Barbeque purchased almost $70,000 of beef and pork from Hormel. The beef and pork had traveled in interstate commerce to arrive at the restaurant. The question before the Court was whether Title II was a valid exercise of the power of Congress as applied to Ollie's restaurant.

While the owner of Ollie's Barbeque argued that the refusal to serve blacks did not burden interstate commerce to an extent that Congress could legitimately prohibit such discrimination, the Supreme Court disagreed. In an opinion authored by Justice Clark, the Court found that discrimination in restaurants posed significant burdens on "the interstate flow of food and upon the movement on products generally." Additionally, discrimination posed restrictions on blacks who traveled from state to state. Accordingly, Congress's passage of the Act to resolve this problem was appropriate and within its bounds to regulate interstate commerce.