First Critical Edition of the 1215 Text

William Blackstone. The Great Charter and Charter of the Forest, with Other Authentic Instruments, to which is Prefixed an Introductory Discourse on the History of the Charters. Oxford: Clarendon Press, 1759. 35 cm. Modern buckram. 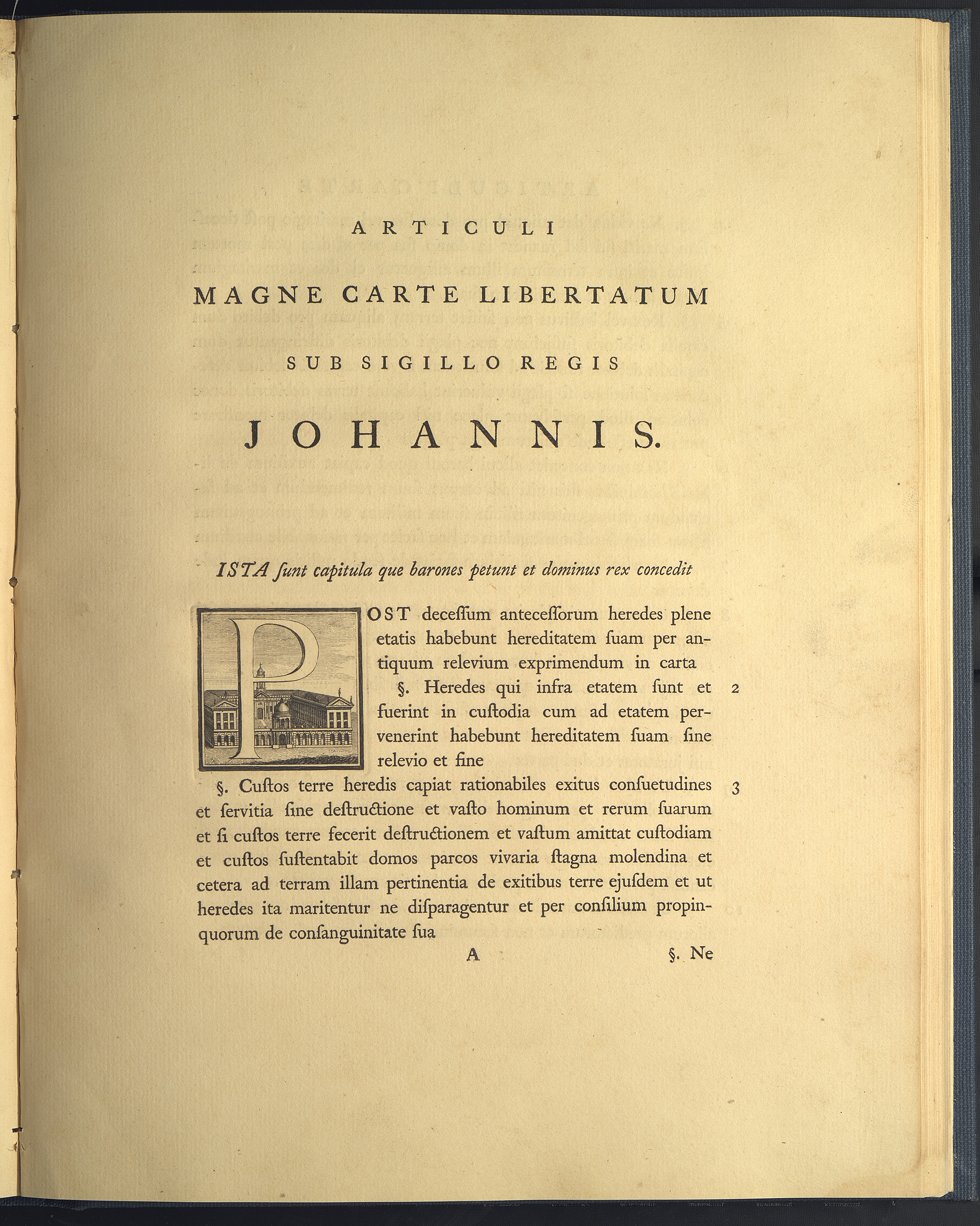 This work was immediately embraced not only for its scholarship, but also for the highly aesthetic printing. The introductory essay, which represents about half of the volume, is influenced by Lord Coke’s interpretation of Magna Carta as the foundation of English liberties. Blackstone’s original contributions includes a close examination of the versions of Magna Carta, and represents the first demonstration that all subsequent versions of the charter were based on the 1225 re-issue of Henry III, rather than the original endorsed by King John in 1215. His approach was highly influential and it established the textual focus that has governed subsequent study of the charter. Blackstone also created the numbering system that is still in use.

The book itself is very attractive. The text is decorated with engravings throughout: initials in the text are ornamented with engravings of various buildings at Oxford University, while the tail pieces are historical vignettes and facsimiles of the royal seals attached to the original documents.

Sir William Blackstone (1723-1780) needs little introduction. Born in London, he was educated at the Charterhouse School and Pembroke College Oxford before his admission to the Middle Temple in 1743. He was called to the bar in 1746. Always drawn more to academe than to practice, Blackstone gave up his career as barrister in 1753 and concentrated entirely on his career at Oxford University. On 20 October 1758 Blackstone was confirmed as the first Vinerian Professor of English Law. His lectures and the works that grew out of them were enormously popular and influential. His best known work remains Commentaries on the Laws of England, first issued between 1765 and 1769. With his rise to fame, his legal practice grew, and in 1766 he resigned his professorship. He was appointed Justice to the Court of Common Pleas in 1770, and spent most of the rest of his career in that capacity.

Exhibit at the British Library