A Year-Book of Edward III 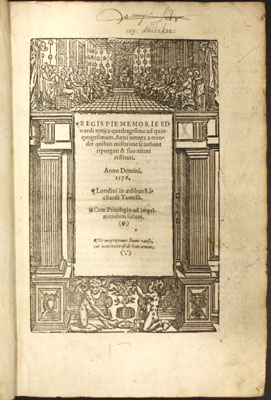 His best known legislative acts include the Statute of Laborers (1351) and the Treason Act (1351). He is also credited with the establishment of effective local law enforcement by increasing the powers of the Justices of the Peace after 1350. This volume is a Year-Book covering the fortieth through the fiftieth years of his reign, or 1366—1376.

The Year-Books first appeared in manuscript on parchment and were stored in rolls (rotuli).

Year-Books were a series of notes on debates and points of pleading in Norman England. As such, they are crucial primary sources for medieval common law. The origin of the Year-Books is unknown. Some historians believe that the earliest volumes were notes taken by law students in court copied for the use of pleaders in later cases; others argue that they were records of cases made by lawyers for personal use. Although it is not known when the first manuscript volumes were compiled, it is clear that cases can be found to date from the 1270's and the series continues to 1535. Printed editions of the Year-Books were first issued by William de Machlinia between 1481 and 1482.

For more information see our guide to citing the Year-Books.