An Early Imprint on Criminal Law

Sir William Staunford (also Stanford, 1509—1558) was an English jurist. In 1528 he joined Gray’s Inn, one of the Inns of Court that have trained and regulated barristers since the fourteenth century, and began practicing law before 1536. In 1542, he was appointed attorney-general to the newly established court of general surveyors of crown lands, and obtained a grant of arms. In the following year, he became a justice of the peace for Middlesex. Probably in September 1554, he became a justice of the common pleas, receiving a knighthood in 1555 and died in office on 28 August 1558. He was survived by his widow, six sons, and an equal number of daughters. 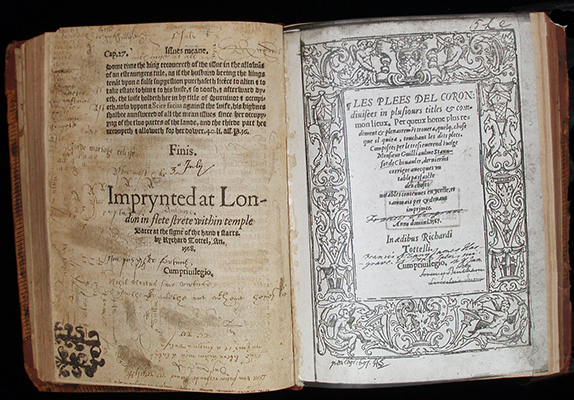 First published in 1557, Staunford's Plees is considered one of the monuments of English law by late nineteenth-century legal scholars Frederic Pollock and Frederick Maitland. The work makes it possible to follow the development of modern criminal law from its origins in the high middle ages into the early modern era, roughly the thirteenth to the sixteenth centuries. The title refers to the method of bringing suspected serious criminal offenses to the attention of the monarch and his or her representatives -- men from various regionswould submit a request to the King (or Queen) and his or her justices, identifying a cirminal and his or her crime in the hope that matter could be resolved -- a "plea to the crown." Only the monarch and his or her representatives had the right to deal with serious criminal cases. Staunford's work is structured around the contents of the section “Corone” (Law-French for Crown -- the section on criminal law) in Fitzherbert's Graunde Abridgment, and the work cites Glanville, Henry Bracton’s On the Laws and Customs of England and the Year-Books. Staunford's treatise is divided into three parts. The first treats offenses; the second treats jurisdiction, appeals, indictments, and defenses; whereas the third addresses trials and convictions. Plees was written shortly after Staunford was appointed judge of the court of common pleas in 1554 and is considered to be his greatest work.

The Tarlton copy is bound with another Staunford work: An Exposicion of the Kinges Prerogative Collected out of the Great Abridgement of Justice Fitzherbert. After 1607, the two works were typically issued together. Shown is a glued in replacement title page. Replacing missing pages with either manuscript transcriptions, pages out of another copy, or, later, photo-reproductions was common practice through the middle of the twentieth century and occasionally beyond.