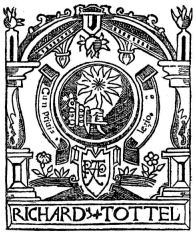 Richard Tottell was the third son of Exeter businessman and mayor, William Tottell. The surname appears in at least twelve English spellings, and as meticulous as Richard Tottell was to become in printing, he never settled on a single spelling of his name.

Tottell served his apprenticeship with two printers before he was admitted as a member of the Guild of Printers in London in 1552. The Guild of Printers, later the Worshipful Company of Stationers, replaced of the Guild of Stationers founded in 1403 -- a professional association of scribes, illuminators, bookbinders, booksellers, and with the advent of printing, printers. His success was almost immediate, and in 1553, a few months before Edward VI's death, he was granted the exclusive right to print for seven years all legal texts except statutes, which were issued by the King's or Queen's Printer. When Mary came to the throne in 1553, Tottell benefited from the patronage of formerly exiled Catholic jurists, including William Rastell, Thomas More's nephew. Tottell's royal patent was renewed by Mary on 1 May 1556. Shortly before Elizabeth I’s coronation, January 12, 1559, Elizabeth I granted Tottell the royal patent for as long “as he shall behave and demesne him selfe well in using of the said priviledge” – effectively a monpoly for life. Sometime in the later 1550's he married Joan Grafton, daughter of former royal printer, Richard Grafton.

Tottell published a large number of editions of seventy-eight different titles, becoming quite wealthy in the process.

He remained active in the Company of Stationers from its incorporation as a Royal Livery Company in 1557 until poor health required him to retire to the countryside in 1588. He died a few years later in September 1593.

Strangely, although Tottell’s fortune and legacy lies with his legal printing, he was best known in his own time and long after for editing and printing a wildly successful collection of early Tudor court poetry entitled Songes and Sonettes, better known as Tottell’s Miscellany.