Statutes: the Other Law Book Monopoly

Ferdinando Pulton. An Abstract of All the Penal Statutes which Be General, in Force and Use. London: Imprinted by Christopher Barker, printer to the Queenes Maiestie, 1579.
Written in English.  Contemporary blind-tooled calf.  21 cm x 15 cm.

Ferdinando Pulton (1536—1618) was the first scholar to attempt a systematic edition of English statutes. 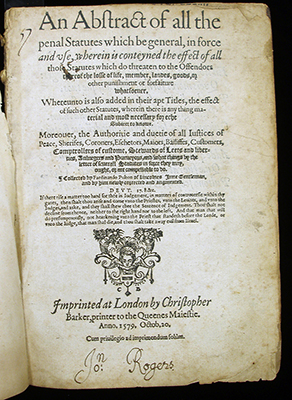 He was educated at Cambridge, and in 1556 became a member of Lincoln’s Inn, one of the Inns of Court that since the fourteenth century have trained and regulated barristers. Although he was a Roman Catholic, he was also a staunch supporter of Elizabeth I and later James I, and as such managed to have a successful legal career in spite of his religious views. Pulton's compilation of statute law consisted of five major works: An Abstract of All the Penal Statutes which be General (1577), A Kalender, or Table, Comprehending the Effect of All the Statutes that Have Been Made and Put in Print (1606), Collection of Statutes Repealed and Not Repealed (1608), A Collection of Sundry Statutes Frequent in Use (1618), and The Statutes at Large (1618). He was also the author of De pace regis et regni (1609), a major treatise on criminal offences.

Christopher Barker (c. 1528—1599) established himself in London as a member of the Draper’s Company (wool/cloth guild) in 1559, he soon became involved in the book trade – attracted by the lucrative monopolies awarded to printers by the crown.  His first patent (or monopoly) was for the printing of the Geneva Bible in 1576 in the English language. The monopoly was quickly extended to printing of all Bibles written in English in 1577 when he assumed the post of Queen’s printer. With this office came also the right to print all acts of Parliament and statutes. In 1578, he became a member of the Company of Stationers. He remained quite active in the organization until 1588, when he more or less retired to the country. He did however, manage to keep the patent in the family and the Barkers continued as a dynasty of printers for almost one hundred years.

For more information see our guide to citing statutes.