The Authoritative Work on Writs 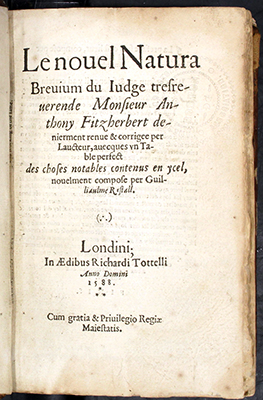 A less monumental, but arguably more original work by Anthony Fitzherbert (c.1470—1538) was
La novel natura brevium (the new [on the] nature of writs) which first appeared in 1534. He appears to have taken his inspiration from the Vetus natura brevium or just natura brevium (vetus = old), the name associated with two or more different medieval treatises which contained the writs most in use in the reign of Edward III, together with a short commentary on the application and properties of each of them.

Fitzherbert’s work was a new, far more detailed treatment and incorporated references to recent cases and to his abridgement. It remained the principal reference work on writs until the abolition of those forms of action in the nineteenth century. 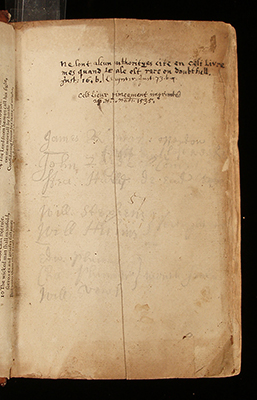 The work is still cited in common law courts as a book of authority. "Books of authority" is a term used by legal writers to refer to a number of early legal textbooks that are excepted from the rule that all books other than statute or law reporters are not treated as authorities by the courts of England and Wales and other common law jurisdictions.

This was the first of Fitzherbert’s works that Tottell published and his second legal publication. He ultimately published six separate editions.This work has another of Totell's reader's aids -- elaborate tables of contents and lettering sections.

This early ownership mark notes that these citations are not authorities except when the case is "rare or doubtful", and that the work was first printed 26.H.8 (26th year of the reign of Henry VIII), May 1535.