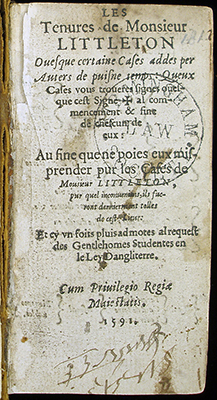 was heir to his mother’s family estate and so took her surname. In the 1430s, Littleton went to London to study law and was admitted to the Inner Temple one of the Inns of Court that have trained and regulated barristers since the fourteenth century.  He had a flourishing legal practice by the end of the 1440s, and was appointed a justice on the court of common pleas in 1466 where he served until his death. In addition to his family’s lands, he greatly augmented his family’s estate through marriage and purchase.

Although during his lifetime he was best known for his work on the Year-Books, his enduring fame is due to a short treatise on property published posthumously without a title, and known simply as Littleton’s Tenures. The work was printed by John Lettou and William Machlinia in either 1481 or 1482, but as it is thought to have been written for Littleton’s sons, the work itself probably dates from fifteen or so years earlier.  Several contemporary manuscripts survive.

The treatise is divided into three books. The first book addresses estates in land, the second book deals with tenures, 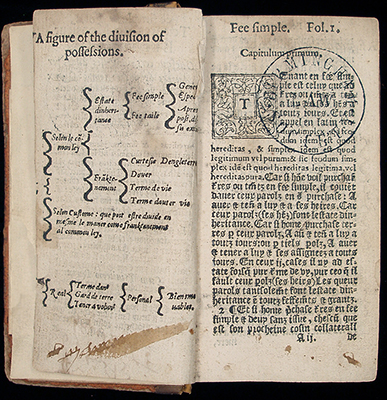 and the third, which is considerably longer, concerns titles. The first book begins with a definition of fee simple, which is still found in textbooks on real property today. These first two books purportedly explained the fourteenth-century work Old Tenures, which Littleton’s work promptly and completely superseded.

Littleton’s Tenures and a Year-Book of Henry VI are thought to have been the first law books published in England. Littleton's Tenures has the distinction of having never gone out of print.

This tiny copy probably belonged to a practicing lawyer.